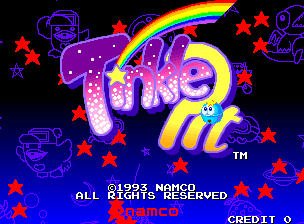 Tinkle Pit is an arcade game that was released by Namco in 1993 exclusively in Japan. The player walks around mazes collecting items while accompanied by a big sleigh bell. The player can drop the bell and move around by pressing the A button, which makes a line between him and the bell. Releasing the A button makes the bell come back to the player, with enemies being killed by the bell slaming them on the way back. There are also power-up balls that can be picked up and by pressing the B button, the player can throw them. The balls will bounce off the walls until they hit an enemy. Killing all enemies in a maze advances the player to the following stage. Enemies and power ups in the games are from other Namco games such as Pac-Man, Dig Dug, Galaga and so on.